Anyone who has heard the Queen’s speeches will recognise her distinctive British accent. This is RP – ‘Received Pronunciation’. This year, Her Majesty The Queen will become the first British Monarch to celebrate a Platinum Jubilee after 70 years of service. So it seems like a fitting time to have a little look at the history of RP and its place in British society today.

It can surprise people to learn that Received Pronunciation is a relatively recent arrival on the British accent scene. Surely this way of speaking – often viewed as prestigious due to its associations with the Royal Family, the British establishment, and the BBC – has been there since English began? Not so. For the first thousand years of English in Britain, there was no such thing as a ‘standard’ accent. People spoke in different ways, reflecting their regional backgrounds, regardless of their level of education or social class.

In Shakespeare’s day, having a broad regional accent didn’t stop you from becoming powerful in the kingdom. As shown by famous explorers Francis Drake and Walter Raleigh, both said to have strong Devonshire (South West) accents. Indeed, you could become king with a regional accent. As happened in 1603 when James VI of Scotland became James I of England, Scottish accents echoed through the corridors of power.

The first mention of Received Pronunciation

RP didn’t exist in 16th-century England. People in the South-East, around the capital, of course, considered their way of speaking to be superior. By the end of the 18th century, the accent used there by the upper classes had become the pronunciation to imitate if one wanted to appear cultured. As social mobility became more viable, the demands of an up-and-coming middle class wanting to speak in a way that wouldn’t be criticized or judged badly by those from higher society, grew. Lessons in ‘correct’ pronunciation, also known as elocution lessons, became more common. And an elocution movement grew to meet these demands. And the term ‘received’ came into use, meaning the kind of pronunciation that was socially accepted because it had been passed down by the ‘higher orders’ in society from one generation to the next.

The actual character of RP developed as a partly conscious and partly unconscious attempt by upper-class speakers to distinguish themselves from those of the ‘lower orders’. If people from poorer parts of East London, also known as Cockneys, dropped their ‘h’s, in words like happy, then anyone wanting to be thought cultured would not do so. If people in the South-West of England pronounced the ‘r’ after a vowel, in words like car, then cultured speakers would not. If people ‘up north’ said bath with a short ‘a’, then cultured speakers would make it long: bahth. As this new accent evolved, it became the voice of English worldwide. It was the preferred pronunciation in public schools. And the products of those schools – the missionaries, diplomats, civil servants, and military officers – took the accent around the globe during the formation of the British Empire.

RP continues to have a presence, especially in public broadcasting, but its phonetic character has changed. Accents never stand still. Anyone listening to radio programs made in the 1920s and 30s can’t fail to be struck by the ‘far back’ sound of the RP accent then – when, for example, lord sounded more like ‘lahd’ – but even the accents of the 1960s and 70s sound dated now. And changes continue to take place. Young RP speakers have begun to spread their lips when pronouncing the long ‘oo’ vowel, in words like cool. They replace the very open vowel in words like cupwhich used to sound almost like cap; today it’s more like the central vowel we hear in the.

Attitudes to RP have also changed. For most of the 20th century, it was the uncontested prestige accent of Britain. It was valued for its associations with the World War years, the Royal Family, and classical actors such as Laurence Olivier. But in the closing decades, a fundamental change took place, reflecting a society in which successive waves of immigration, greater work for regional speakers, and the rapid increase in local commercial radio introduced an array of new voices and listening experiences.

Broadcasting was a critical factor, as that was the main way in which people heard these new voices. Regional radio gained audiences by meeting the interests of local populations. And these new audiences liked their presenters to speak as they did. Soon, non-RP accents began to be used as part of the ‘official’ voice of national radio and television, and became the norm for commercial television advertisements.

There’s now a much greater readiness to value linguistic diversity than there was a generation ago. British accents which are considered ‘educated’ and ‘cultured’ still exist, of course, but they’re more flexible and varied than they used to be. They often incorporate features of regional accents, producing what is called ‘modified RP’ or ‘General British’. Estimates are uncertain, but traditional RP, never spoken by more than about 5% of the population of England, has now fallen to around 2%. Indeed, because of the status of RP as the default accent in teaching English as a foreign language, these days you’re much more likely to hear it spoken in Moscow or Buenos Aires than in London!

When the Queen came to Cambridge

Back in 1981, Queen Elizabeth II officially opened Cambridge University Press’ Edinburgh building. We have teams all around the world, but this is where our Cambridge team is based. We haven’t seen the Queen since, but the invitation’s open… 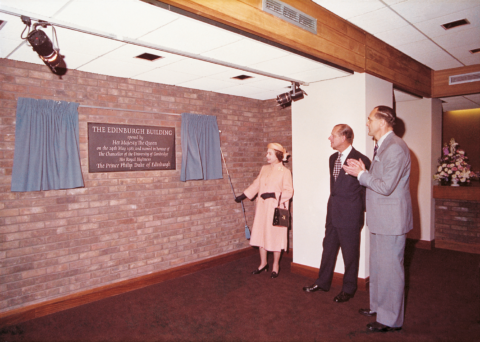 So yes, RP has an association with prestige from back in the day. And if you’re learning English, it may well be the preferred pronunciation of your course material. People all over the world are learning English, and your first language is bound to have an effect on your accent.

But don’t let that worry you, because expert English speakers have all kinds of accents too. So whether you have a bath or a bahth, are feeling happy or appy, you’re very welcome.

If you’re interested in accents, you may like to look into what really matters when teaching pronunciation.