Editor’s Note: My Ed Week column, What the Teacher and Classified-Staff Strike in Sacramento Means for the Country, is a good companion piece to this guest post.

Alice Mercer teaches fourth grade at an elementary school in Sacramento, CA. She started her career in Oakland, Ca, and moved to Sacramento in 2001. She is the parent of a now-adult son with ASD, and is a caregiver to her husband who is medically fragile. Alice is active in her union and on social media.

I am now on Day 8 of a school staff strike as I write. Teachers, together with classified staff (the non-teachers who make a modern school possible) have joined together to address the staffing crisis in the Sacramento City Unified District. We have been united and grown stronger over these eight days as parent, students, community leaders and our most enlightened local elected leaders have rallied behind our movement to ensure that every student has a teacher in the classroom, and that our schools are fully staffed, With the tragic news of yet another mass shooting, this time right here in our backyard, now more than ever we need to be back in our classrooms providing the education, but just as importantly, the social and emotional support that our students and our community needs.

Here’s how LA Times columnist Anita Chabria and SCUSD parent describes the issues (Spanish version here) we are fighting for: “I went to the strike three times and I can tell you this–it’s not about the money for these teachers. You can roll your eyes at the unions all you want, but these teachers and support staff want their schools to work, for their students, for themselves, and for our collective future.”

What are the issues?

How did this happen? How did a school district with a surplus of almost 20% of their current operating budget (much of which it needs to be spent in the coming year because of state law), in addition to $320M of COVID relief dollars (not all of which has been spent or assigned) get away with demanding teachers make a give-back (pay more for healthcare) while they avoid bargaining with the classified staff trying to obtain a more livable and humane situation? 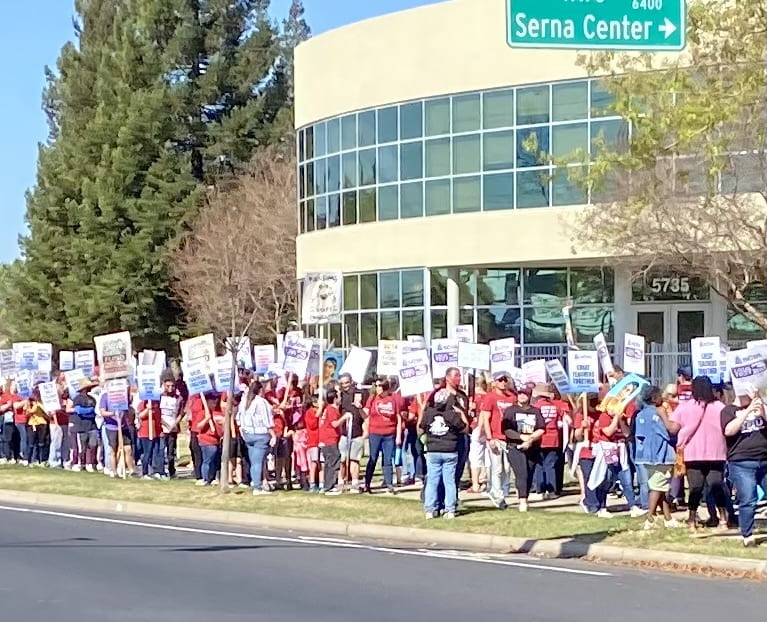 This is a story about a lack of skilled leadership. A district with people in charge who don’t know what’s happened, don’t know how the district runs or what its fiscal condition is, or even what their job is, or who is responsible for what.

This lack of skilled management is particularly evident regarding fiscal management. It combined with a recession in 2008, when hundreds of teachers had to be laid off in spite of sweetheart contracts for Board-connected entities. Some of those residual poor practices led to a “fiscal crisis” in 2017 that turned out to be bad accounting rather than excess spending.

Add in hiring out of critical positions around legal services and negotiations with labor partners, and you have:

Things have hit a crucible with this strike from the two largest employee unions now entering its second week. The district’s approach is to blame the employees, calling upon us who work in the classroom to “think about the children” (thousands of whom do not have a permanent teacher and are learning in a district that has 400 unfilled support staff positions). We were called upon to return to work and settle our differences “later.” This completely ignores months of unproductive, inconclusive, and downright hostile negotiation tactics they engaged in before the strike began.

A few things have been critical to our efforts:

UPDATE, how we landed the plane…

Because of the unending pressure of teachers and staff staying true to the picket lines (some of them increased in turnout as this went on), the support of outside elected officials, our labor partners, and most critically in the last five days, parents who staged an occupation of the district headquarters as we were occupying it for bargaining; the district bargaining team changed the course for the better and began to bargain constructively over the weekend. By the time you read this, I’ll probably be doing lesson planning for a return to the classroom on Monday, where we never stopped thinking about the children.